In a high caliber field of competitors from every corner of the world, the Gold Medalists, and new World Champions are France’s Titouan Puyo and Australia’s Rhys Burrows in the SUP and Paddleboard races respectively.

“These stellar athletes have done a tremendous job racing through the most beautiful islands on Lake Nicaragua for 18 kilometers in about two hours. Today was another amazing day in the ISA World Championship, with a lot of excitement in the water and on the beach. As the event comes to an end tomorrow, lots of new friendships have been started, and old ones strengthened. Twelve Gold Medals will be awarded, but the competition has included 260 national stars of the top 27 SUP nations in the world. On Sunday we will be crowning the Technical and Relay Races Champions, and holding the Closing Ceremony awarding individual and World Team Champions.”

The ISA President welcomed every one of the racers as they crossed the finish line, handing them a cold bottle of water to help cool them down after a grueling race, especially the last 2 Km, which was a stiff upwind leg.

The Men’s SUP Long Distance Race kicked off with 15 of the 35 racers forming a lead pack. At first, the group was led by Mexico’s Fernando Stalla, who took off in a sprint out of the start followed by Slater Trout (USA), Eric Terrien (FRA), and Casper Steinfath (DEN), amongst others. Then, Americans, Trout and Chuck Glynn worked as a team to take the lead. The front running train also included racers from Australia, South Africa and Brazil.

The South African racer, Ethan Koopmans, suffered a shocker, as he was part of the lead pack and was closing in on the leaders, but in the middle of his effort his paddle broke in half. However, Koopmans did not give up, and even though he finished in last place, he completed the course paddling, holding his broken paddle in his hand.

As the race progressed through the picturesque islands, the French duo, Puyo, a downwind specialist, and his teammate, Terrien, took over the lead and seemed to be uncatchable. The Americans, Stalla, and Steinfath did their best to keep up, but only the Aussie, Lincoln Dews, the 2013 ISA World Paddleboard Silver Medalist, was able to remain close to the leader.

“It feels amazing!,” said an elated Puyo about being World Champion. “It was a good race, very difficult at the beginning because of the drafting, since there were so many of us in the first group when we were going through the islands. I knew that if I was in first at the buoy before the open water downwind part, it would be good, and I did it. In the downwind, I was first and I never stopped.”

In the Men’s Paddleboard Long Distance Race, the athletes took off in a sprint from the start and never looked back. The leader’s pack included Rhys Burrows (AUS), Sam Shergold (NZL), Rory Chapman (AUS), and David Buil Sanz (SPA). Despite changing of positions throughout the course, it was the Aussie and Kiwi that sprinted to the finish line.

As Burrows and Shergold approached the finish line, the Aussie had enough left in the tank to outsprint his fellow competitor and took the Gold finishing in 1:55:12.

“It was definitely a very hard race. It was very hot especially when you are in between the islands and there’s no wind, but once you get out in the open lake, the wind is a lot better. I hope there’s a bit of wind chop tomorrow so I can go for another Gold in the Technical Race Final.”

Of special note was the local SUP Racer Norwin Estrella, who finished 23rd in the world with a credible time of 2:07:24.

“I feel very happy to have finished this stage of StandUp Paddle Racing. I feel tired now, but I’m glad I finished the race despite all the challenges along the way and the pressure of the other competitors. After all, I was able to place amongst the best in the world in this category. I’m happy to be here and it’s an honor and I feel proud to represent my country of Nicaragua in both StandUp Paddle and SUP Surfing.”

Another special story was the Delgado family, who are Team Peru members. Raul and his son Itzel both competed in the SUP Long Distance Race, and Raul’s wife, Lizenka competed yesterday in the Women’s SUP Long Distance Course. It was a beautiful sight to see the whole family supporting and cheering on each other in their races.

Competition concludes on Sunday with The Morning Show hosted by Beau Hodge and Jamie Mitchell at 8:40am, followed by: 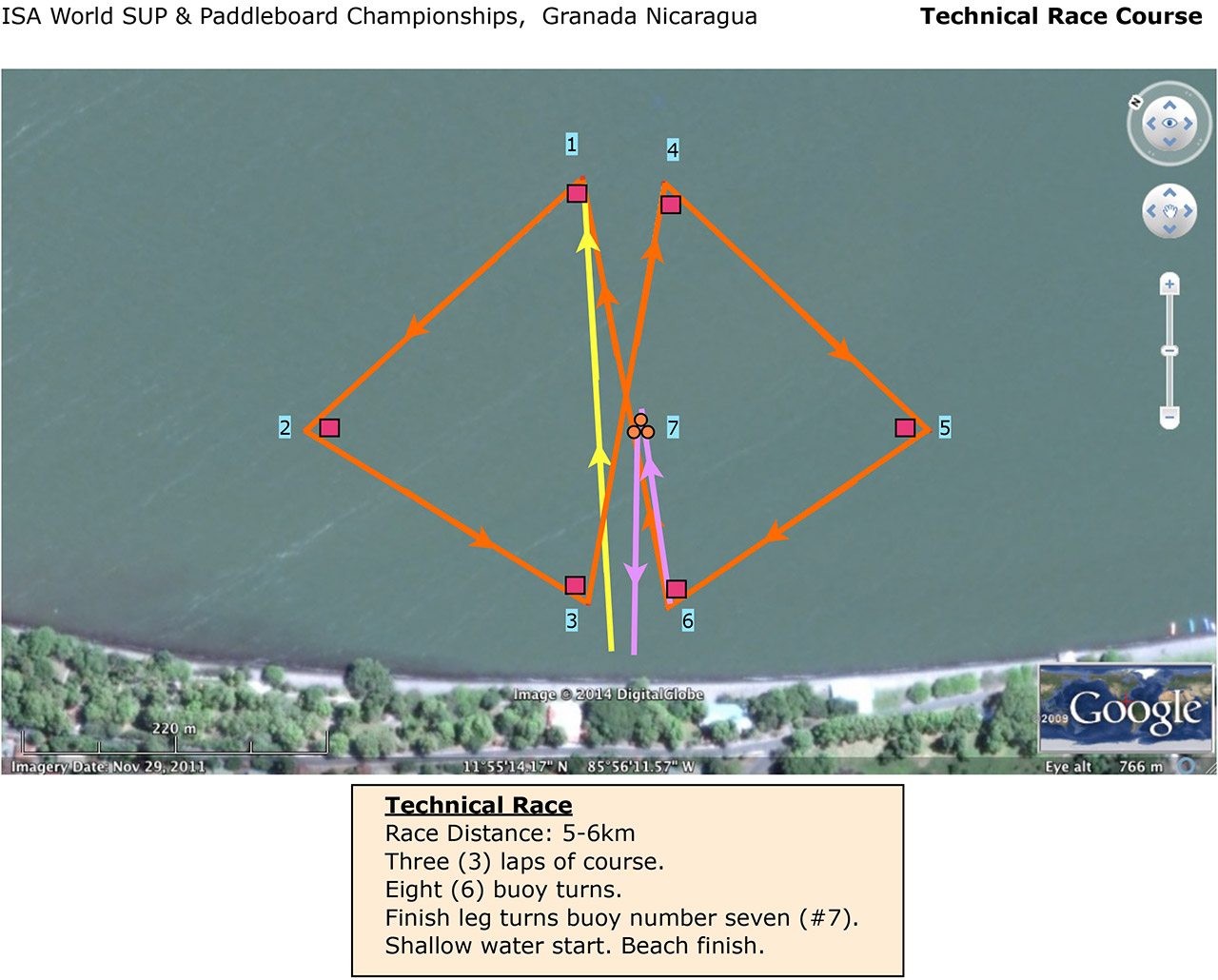